Are you eating enough protein?? Better question: Are you eating too much protein?! Nowadays people will buy into anything to get the results they are looking for. As a dietetics student, I have taken the classes and done the credible research, all that creatine, whey, and meat your piling on is doing you more harm than good. 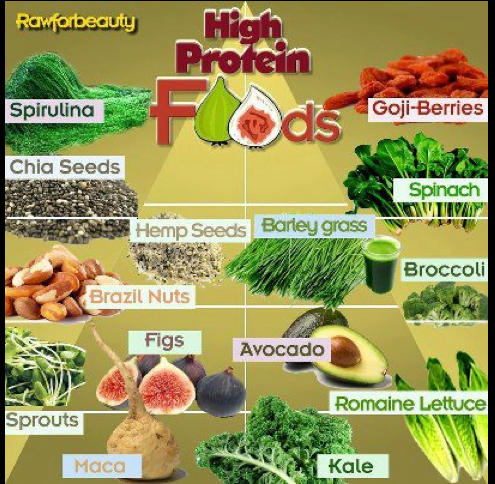 According to our campus dietitian, Michelle Singleton, we only need 0.8 grams of protein per kilogram of body weight. Protein isn’t listed as a percent value on the nutrition label, because the recommended intake varies so much since it is dependent on an individual’s body weight. To get your weight in kilograms, divide your weight in pounds by 2.2. For example, if you weigh 130lbs: 130 / 2.2 = 59kg. 0.8 x 59 = 47.2 grams of protein per day. You would be amazed at how easy this is to meet. 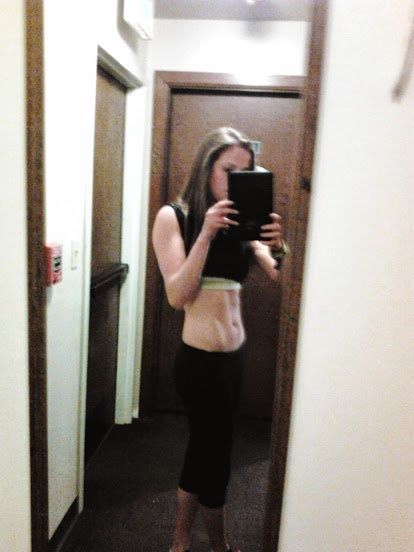 That’s already 7 grams over the amount of protein this person would need of energizing, high fiber, hydrating, and high vibrational protein! And did you know one large egg has 6.3 grams of protein?! Compare that to the list! Also, according to Dr. Sedlock, my exercise physiology professor, there are 28 grams in 1 ounce. So, taking our example from before, if you weigh 130 pounds, you need 47.2 grams of protein per day. If there are 28 grams in an ounce, then we could divide 47.2 / 28 to figure out how many ounces of protein that is. Turns out it is only 1.7 ounces. The serving size of a piece of meat is 3-4 ounces, which is about the size of a deck of cards! With this in mind- supplementing on protein with whey or eating three chickens for dinner is extremely unnecessary.

Metabolizing all of these amino acids is complex business. Don’t make your body work harder than it has to- you’re already such a hard worker as it is! High protein diets can cause a whole slew of issues, the minor ones feeling and fatigued and, grumpy with horrible body odor, to acidosis issues (cancer grows in an acidic body). Don’t get me wrong, if you are a burn victum, or a division 1 athlete, by all means your cells are breaking down and regenerating quite rapidly, and you might want to take in more protein. But wait, what was protein deficiency called again? Oh ya, kworshiorkor. Don’t hear that one too often. Dream big, and carb up!

I’ve learned a LOT about nutrition and fitness, everyday becoming more and more confident in this amazing raw vegan lifestyle.  These past few days I have eaten 100% raw, very low fat, and I have MORE ENERGY THAN I KNOW WHAT TO DO WITH!!

As if springing out of bed before your alarm goes off, or running a mile just because theres a jumping bean inside you that needs to be released weren’t enough.. the clear glowing eyes, silky smooth skin, and superhero S shaped shits are definitely worth learning more about this lifestyle.  I recommend high carb FO SHO!! BUT: I would like to point out that I work out a pretty decent amount, and we can’t all survive 40 days on eating nothing but bananas and dates like Freelee.  Going from scrawny to strong takes a little increase in protein intake- maintenance of muscle mass does not require any increase in protein.  I have been craving the dark leafy greens and goji berries, especially after my workout-pro, stud friend Davis got me to up the weight on the squat rack!  This bowl of beauty hit the spoooooot!  The holistic health counselor that I seasonally assist, Christine Lucas, explained at one of her classes that sprouts are the most nutrient dense foods on land- SO many available amino acids!  In high school, I used to sprout oat groats, and various other grains instead of cooked oatmeal.  These sprouted little wheat berries are so divine blended with fruit like this!

Here’s what you’re going to need:

Blend everything except goji berries until smooth! Swirl in the goji! Super easy! Enjoy!

I have been experimenting with raw veganism for about over 3 years now, and have had quite a rough time, mostly because of social settings, general stigmas, and contrasting beliefs.  I have been lucky enough to have had a senior in dietetics, Tressa Massaro reawaken the confidence in me.  Tressa knows the facts.  The credible information behind it all to be 100% sure!  When I first met her she told me how amazing it was to discover in lab how much protein there was in kale!  I am so glad she re-inspired me!  FULLY RAW FO LIFE!!  This lifestyle can not only prevent but REVERSE sooo mannyy diseases.  It’s unreal.  BUT IT IS REAL.  BELIEVE IT.

She gave a RAWESOME food demo at the pole fitness place she goes to in Merrillville, IN.  My fantastically spontaneous and adventurous friend Davis went with me to it and we ended up having such a wonderful evening!  Tressa’s family owns a beautiful store, “Produce Depot”.  We got a ton of fresh organic ❤ produce and made dinner at her house!  We also had fresh juices and immune shooters (ginger shots) from the depot!  This is what we made:

Drizzled with all this blended until smooth in a high speed blender:

Even Tressa’s family and Davis enjoyed this!  SO MUCH LIFE FORCE ENERGY! We were high on life after all this amazing food.  I even got a text from Davis that night after he dropped me off at home, “I feel awesome right now”.  There is no question about it- eating healthy makes a huge difference!  Let’s see you give it a go! xoxo !!! ❤ ❤ ❤

After researching so much about GMOs and listening to Purdue University’s Food Toxicology expert, Dr. Huber’s talk, it is clear to me that GMOs pose a threat to the health and safety of Americans.

According to Dr. Stan’s talk, cancer is a disease of malfunctioning cells.  Tumors develop initially from normal cells and can either become benign (localized, non-invasive) or malignant (invasive, metastatic) tumors.  Benign tumors are more common as people get older and won’t be a problem unless they disrupt the function of the body.  For example, a benign tumor on the skin would most likely be harmless, but a benign tumor in the brain would start compressing the brain and have a severe effect.  Also, a benign tumor in the thyroid gland, would interfere with endocrine function causing hypothyroidism.  Malignant tumors are the definition of cancer, they can go to neighboring tissues and grow large tumors. They can start in one organ, say in the breast for example, and can metastasize, say into bone tissue (sarcoma), and spread throughout the body. 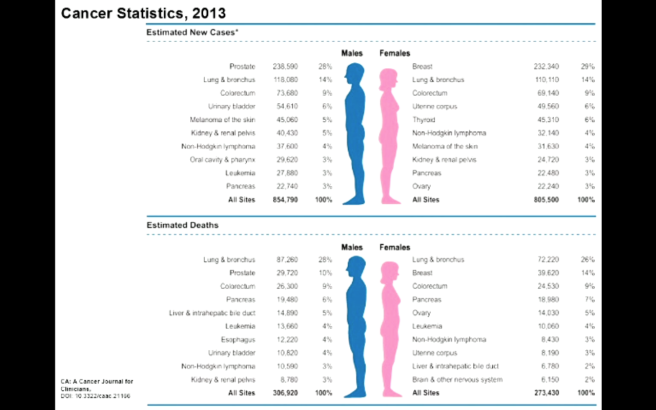 Dr. Stan discussed how according to the figure above, the estimated new cases of cancer is different than the estimated deaths caused by cancer as of 2013.  This means that there are still many issues with the effectiveness of the treatment of different types of cancer, so it is important that we learn how to prevent it. 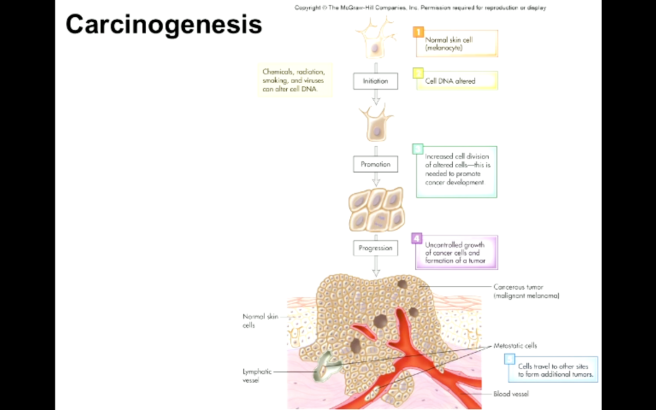 This slide goes over how cancer develops.  Dr. Stan explained how all cancers initially start off as normal tissue, and they develop progressively.  I am personally extremely interested in this again for learning about what dangers GMOs might bring to normal tissues, as well as how to naturally prevent and reverse cancer, possibly with a raw vegan diet rich in phytochemicals.  “As normal cells accumulate mutations, they start getting transformed into benign tumors, and as they accumulate more mutations, that tissue becomes more transformed, and it starts to proliferate.” As you can see in the image above the integrity of the cell changes.  The normal cells have a small nuclei and as cancer progression continues the nuclei becomes large and the cell divides rapidly and easily.  “Normal cells start accumulating mutations and for pancreatic cancer examples of this are K-ras patients and HER2, these are oncogenes which get mutated and then they get activated, and they lead to proliferation of cells.  As more mutations get accumulated, for example p16, p53, DPC4, BRCA2, those are examples of tumor suppressor genes that get mutated and therefore inactivated.  ‘Tumor Suppressor Genes’ keep the tumor small, so when they get inactivated the early lesion can grow faster and may lead to more advanced lesions and eventually the development of cancer and the metastasis to other organs.”  Dr. Stan explained how cancer development can take decades, which means there leaves a large window for preventive strategies or for preventive agents to be utilized to prevent the development or the progression of cancer.

Both hereditary and environmental factors can influence cancer risk.

Diet an Cancer: Things to Consider:

“There are other factors in the diet that can lead to the development of cancer, this has to do with carcinogens.  For example, high intakes of grilled meat can lead to increased risk of some cancers.  That is primarily from the compounds that get formed during grilling.

A fellow student in the class asked if these carcinogens are present on other grilled foods, such as grilled vegetables.  Dr. Stan explained, “Different compounds are formed when different macromolecules get burned.  Meats are high in protein, and obviously are going to lead to the formation of different compounds.  There are also nitrosamines in meat products, especially in processed meats, which are going to lead to the development of cancer as well.” 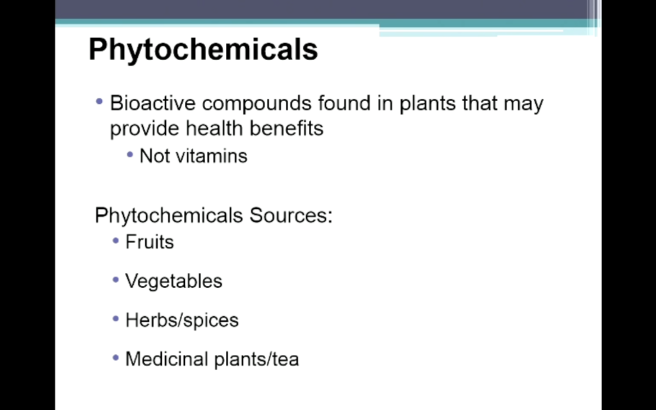 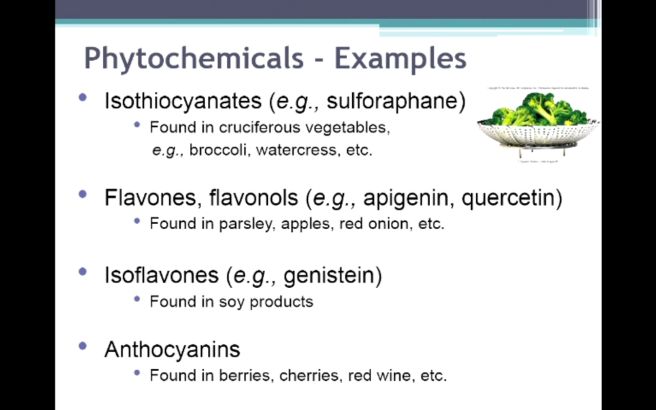 There are thousands and thousands of phytochemicals in fruits and vegetables.  Research is underway to determine which ones are most bioactive. 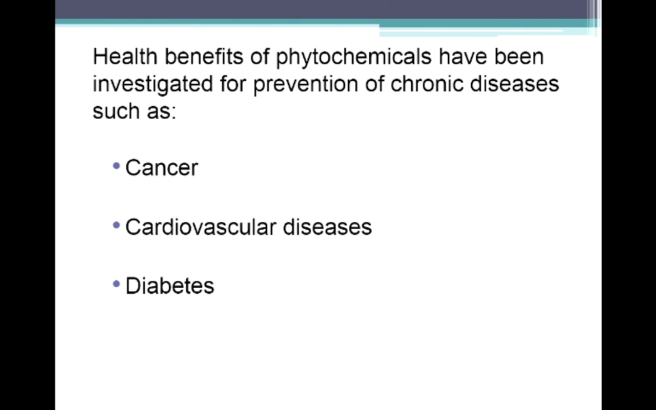 “In order for a phytochemical to be effective, what do you think will need to happen?”

“We consume different amounts of fruits and vegetables, how much of those are needed because so much is needed for a beneficial effect.  In order for these phytochemicals to work they need to be present in enough amounts in the blood.  Researchers are going to see different diets that show effect with different levels of phytochemicals.  It is important to have physiological and feasible levels to be able to make a correlation that that is going to make an effect.  So, plasma levels of phytochemicals are important for activity.”

“Also, how the food is processed is going to effect the amount of active compounds that work.  “Raw food vs. cooked food.”  During the metabolism and absorption some phytochemicals need to be broken in a certain way so they can be congugated, and in order to be absorbed they need the action of a certain enzyme. For example for isothiocyanates, they need an enzyme called myrosinase, which is released during chewing of the raw vegetable.  If the food is boiled, the enzyme is inactivated, so obviously that is going to effect the action of the phytochemicals.  So, the contents in the food can effect the amount of the active compound.”

As you can see, Dr. Stan mentioned how the bioavailability and composition of phytochemicals can vary.  This made me think of organic vs. GMO as well as fruits and vegetables ripened in ethylene gas chambers as opposed to picked when ripe.  I can imagine the picked ripe, organic fruits have vegetables have more phytochemicals than GMO conventional ones. 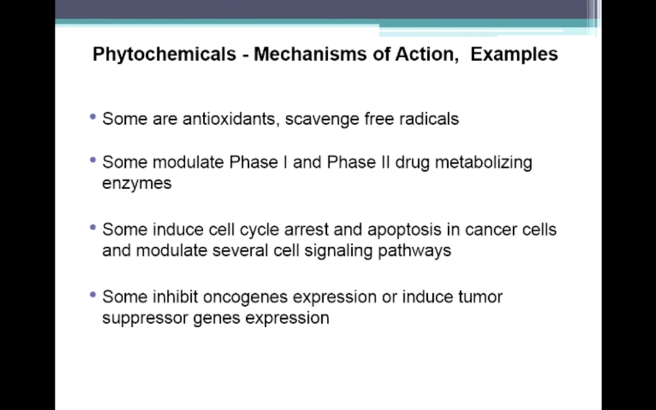 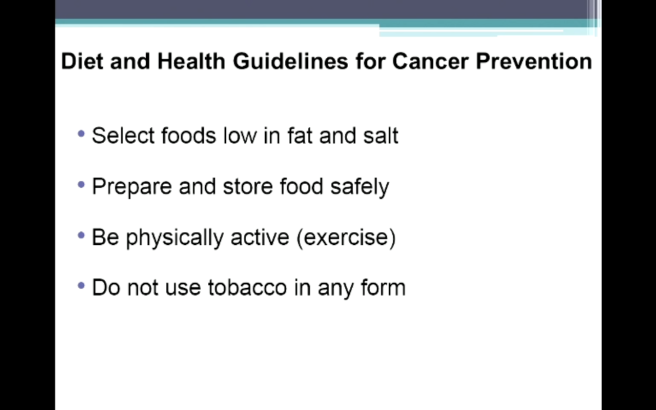 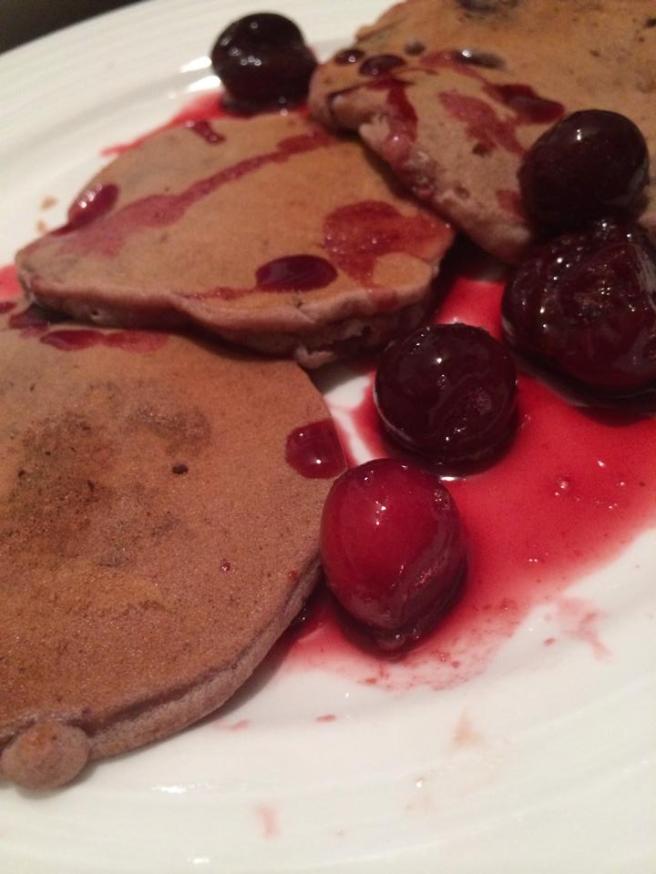 I made these with my friend James Wallace (meat loving runner 😉 ) and he thought they were pretty impressive!  We are both so lazy and cheap (as are all college students, honestly) and it was awesome that we could make something so yummy for dinner with cooking and clean up taking less than like, what 10-15 minutes?

Here’s what I used: